Reuben VK7FREU and I set off on the afternoon of the 17th January 2017 and drove up to Mt Field National Park, about an hour’s drive from Hobart. We called in at the Ranger station and signed in the Alpine walks book outlining what we were intending to do. Then a 20m drive up to Lake Dobson. Given the weather report we planned two and half days of bushwalking, camping and SOTA activations. There was rain forecast for the first night then two days of reasonable weather!

We walked up to Rodway Range via the Mt Field West track up past the ski lodges and ski tows.

Panorama of duckboarding between Mt Mawson and Rodway Range

The path then takes you past the Rodway ski tow and the end of the Tarn shelf track and up onto Rodway Range where the low cloud started to roll in. We walked to the highest point and setup our SOTA station around 4:15pm. We were in low cloud the whole time.

Walking across the top of Rodway Range

Condition on 40m were not good and we struggled to get contacts with poor signal reports. We moved to 15m and managed another two contacts. We decided to pack up and keep walking so we reached K-Col and Clemes Tarn with some light to spare. We walked down over Rodway Range and down the block field to the K-Col/Newdegate Pass track turnoff. We called in to the Peterson Memorial Hut and said hello to a couple who had setup for the night. We then walked about 500m further on to Clemes Tarn and setup our tent, had tea and went to bed – that’s when to fun started!!

Around 4am we woke to gusty wind that was hitting our little tent really hard. Unbeknown to us we were in an exposed saddle that was taking the full westerly wind and rain force. Around 5pm one of our aluminium tent poles broke (went off like a gun!) and ripped the tent. I was able to tape up the break with the roll of electrical tape but we decided to pack up  and head back to the Peterson Memorial hut. We then got some sleep and breakfast and bid the other bushwalkers goodbye as they were heading back down. The morning was still blustery and low cloud covered Mt Field West and Florentine Peak with bursts of driving rain and sleet.

We hung around the hut for a few hours and read all about the hut as it was opened by Sir Edmund Hillary back in Easter 1960 and had recently been lined with Tassie Oak and is in really good condition. The cloud didn’t clear and we decided to abandon the Mt Field West and Florentine Peak activations and come back another day. We decided to walk back the K-Col Track over Newdegate Pass and along the Tarn Shelf as Reuben had never been along Tarn Shelf.

We had lunch just before Lake Newdegate and walked back along Tarn Shelf which is a great walk as you weave your way through many tarns and glacial features. This is an excellent ice age Permian landscape with some great geological features. 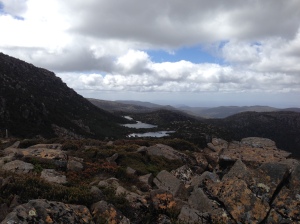 We walked back to the car at Lake Dobson via the ski fields huts and signed out at the Rangers headquarters and headed home for a night. The next morning we headed back to Mt Field National Park and signed in and up to the car park near Lake Fenton for the Mt Field East walk. The day was glorious with blue clear skies! The walk into Mt Field East takes you past Lake Fenton and steadily up and over the saddle between Seegers lookout and Mt Crooke then down into Windy Moor and up the rocky knoll that is Mt Field East. It took us about 1.5 hours up and 1.25 hours back.

Panorama across to Mt Mawson and Rodway Range from the saddle.

Windy Moor lived up to its name and it’s muddy as well! Definitely gators and walking boot are the go! We climbed to the summit and there is a rock walled enclosure that provides shelter from the wind. We setup our station and started calling CQ around 1pm. The contacts on 40m were slow and signal reports not strong. We moved to 15m and managed to contact ZL1BYZ and could hear JL2OES but he could not hear us. Back to 40m and contacted a few more and up to 144MHz and managed to get VK7DX at Arthurs Lake on the 40m dipole!

Given the bright sunshine the skinks were out in force and at one stage I counted 11 in the little rock enclosure.

More friendly and curious skinks – one even jumped on to Reuben’s back and explored!

Thanks to all who contacted us during our three days in Mt Field National Park.

Catch you on a summit soon.